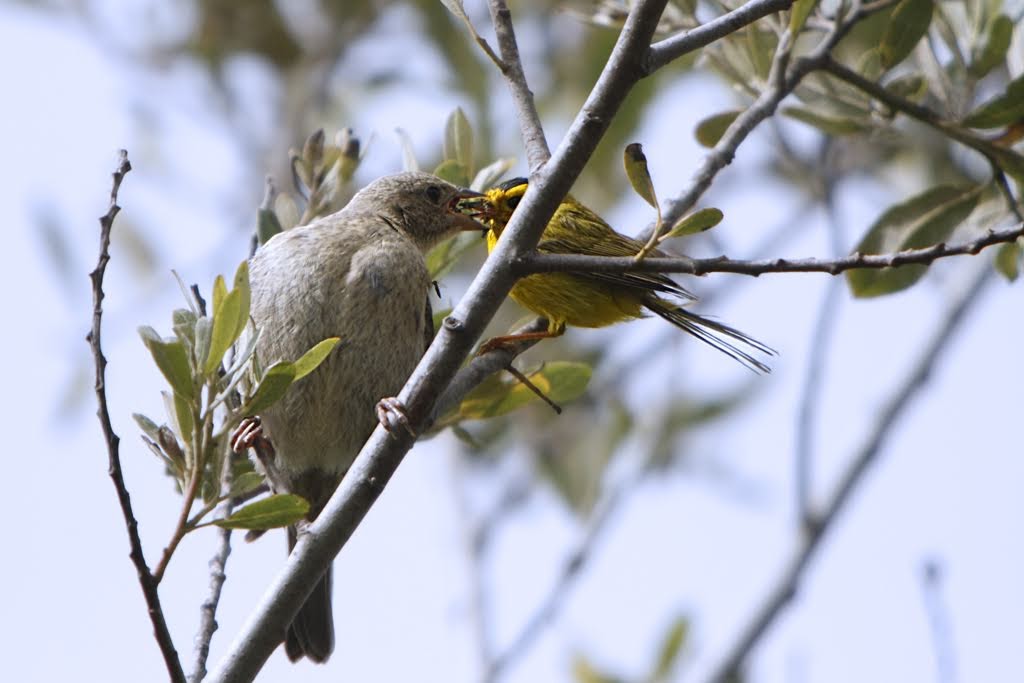 Brown-headed Cowbird: The Brown-headed Cowbird (Molothrus ater) is now a relatively common native blackbird distributed continent-wide. It has been able to expand from its traditional range in the open grasslands of the Midwest by following cleared forest habitats that have been opened up for human use. Described as a “brood parasite” it has an unusually successful method of reproducing by laying its eggs in the nests of other birds, often at the expense of the hosts own young. Because it does not need to build nests or rear its own young, the female can focus on producing eggs, sometimes laying up to 3 dozen eggs during the nesting season. The Cowbird is believed to be contributing to declining populations of many smaller songbird species such as warblers and vireos. As a common resident along Putah Creek, the shiny black male can be heard and seen sitting high along open areas giving a gurgling call to chattering brown females who continually search for an opportunity to willingly pass any child-rearing responsibilities to a more responsible parent. 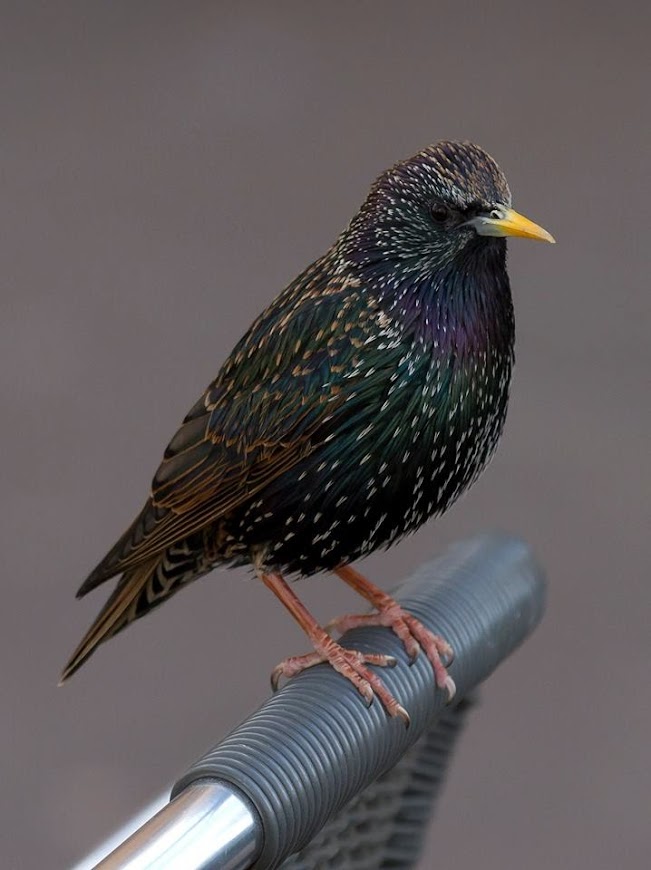 European Starlings: Have you seen these iridescent beauties around? One hundred European Starlings were introduced in New York in 1890-1891 (thanks, Eugene Schieffelin!) and today they are one of the most widespread birds in North America. They are common along Putah Creek, but many folks don't like them - European Starlings compete with native cavity-nesting birds for nest spaces and can cause significant crop damage. But they're quite pretty, fun to watch, and earn some grudging respect for their tenacity!

Roof rat (Rattus rattus): This next offender is probably familiar to you, and loathed as well - and to complicate things, it's a twofer! California has two subspecies of Rattus rattus: R. r. alexandrinus is our familiar roof rat (hear that scurrying in the attic?), while R. r. rattus is more commonly known as the black rat. These rodents are invasive species often found in urban areas, where they enjoy a varied diet of plant and animal foods with a hefty sprinkling of garbage. Black/roof are pests in our households - damaging vehicles, contaminating food stores - and they also carry diseases such as bubonic plague, salmonella, rabies, and tularemia. They may be nuisances to us, but we can address this concern through exclusion (filling gaps that they use to enter buildings), trapping, and chemical means. Others are not so fortunate: black/roof rats are implicated in the declines or extinctions of island birds, as well as other animals. Island-wide eradication is difficult and expensive, so more attention is paid to preventing rats from arriving to new areas. Do your part by sealing up possible entry points and rat-proofing outdoor food sources (like compost bins, chicken coops, and pet bowls). If you do have a rat infestation, consider mechanical or biological removal - trapping or installing barn owl boxes where possible - rather than poison products, which can harm other animals. (Photo: Rattus rattus, CSIRO ScienceImage) 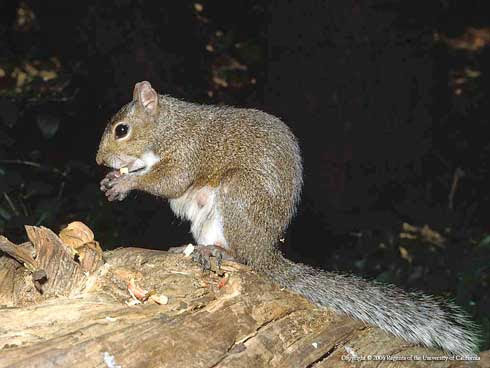 Squirrels: Those cute critters with bushy tails - we see them all over. But did you know we have three different species of tree squirrels in this area? Eastern fox squirrel (Sciurus niger) and eastern gray squirrel (Sciurus carolinenesis) are not native to California, but introduced themselves from the eastern U.S. Both are considered pests in urban and agricultural settings. The eastern fox squirrel (also called red squirrel) is the most serious pest. In and around town they feed on immature and mature almonds, walnuts, apples, apricots and others. They also help themselves to garden vegetables, strawberries, and other crops. In the fall they dig holes in soil and turf, and cache nuts, acorns, and seeds for later, which they may never retrieve. They can tear up landscapes and plant oaks in the wrong places. They gnaw on cables and wires, can chew their way into attics, and can damage trees by stripping off bark. They also carry diseases, and can be infested with fleas and mites. The eastern tree squirrels, as well as their California native cousin, the western gray squirrel, (Sciurus griseus) are common along the creek, #PutahCreek where they feed on seeds, fungi, and other plants, and nest in tree cavities or in nests they construct of twigs, leaves and shredded bark. They can also invade wooden nest boxes designed for cavity-nesting birds. Although many people feed and provide nest boxes for squirrels, to encourage their presence, this exacerbates their bad behaviors -- please don't feed the wildlife. They are difficult to control because they are agile, flexible, and clever, and keeping them out of the yard and garden is a continuous challenge. Cut back trees that are close to roofs or fences, use nets over fruit trees, and generally make the yard less attractive to squirrels. Screens and sheet metal is effective for keeping them out of attics and buildings, and covering garden rows with cage-like covers of chicken wire can keep them out of the garden. 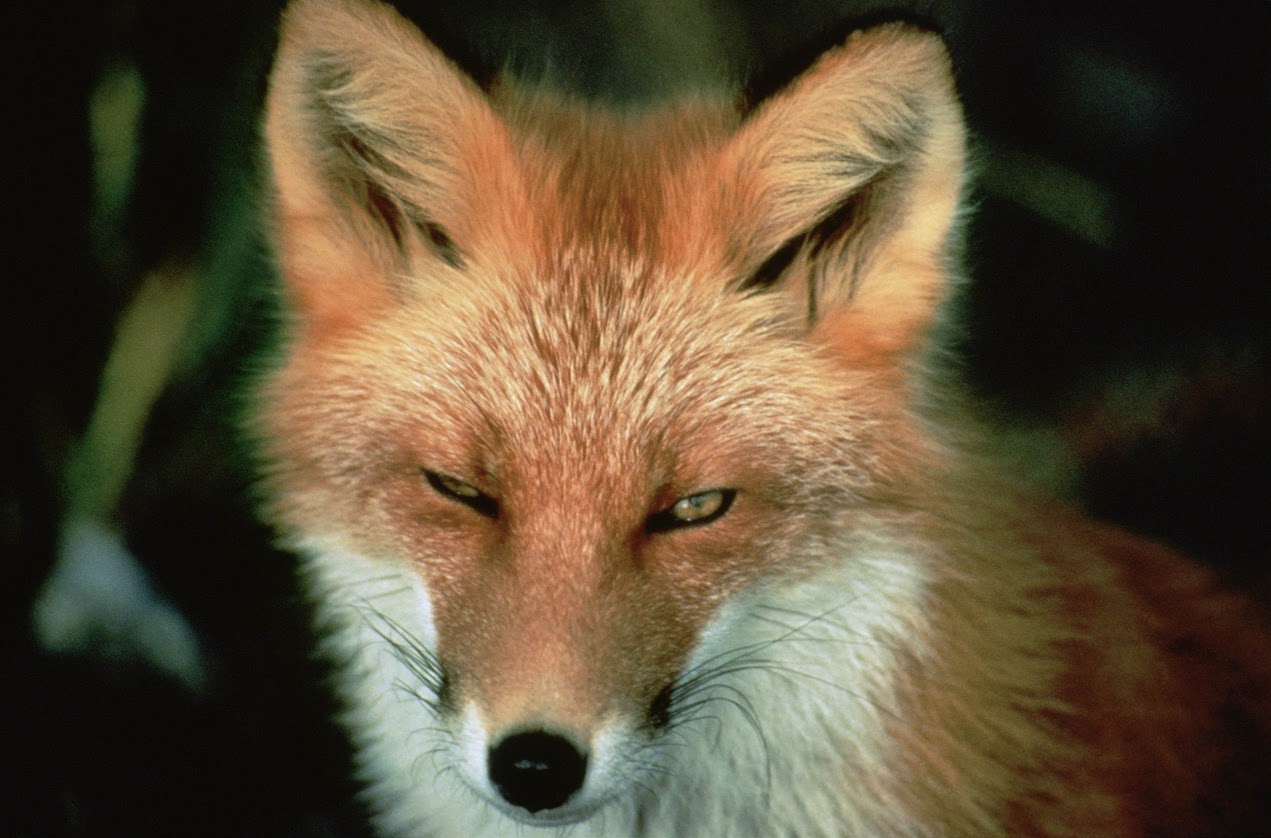 Red fox (Vulpes vulpes): One of the more charismatic of the invasive species in California, the Red Fox, or Vulpes Vulpes, has an interesting history and introduction to the state. A different species from the Sierra Nevada Red Fox, this species was introduced from the eastern US in the nineteenth century. Believed to be decedents of escapees or releases from fur farms, the Red Fox was incredibly successful at adapting to various environments and habitats throughout the state, sometimes out-competing the native Gray Fox. The Red Fox typically feeds on small rodents, birds, berries and insects for the bulk of its diet, and they can even capture larger birds, including mallards and pheasant. Like most members of the dog family, these foxes are incredibly versatile and adaptive and can live in close proximity to people and neighborhoods, or with equal ease in lowlands, riparian zones, foothills and higher elevations. These foxes have whiskers and long, guard hairs on their faces and legs that help them to move through tight spaces and sense their surroundings. And like other members of the dog family, the Red Fox cannot retract their nails. However, the Gray Fox, which occupies similar habitats, can! And most unusual, Red Foxes give off a “skunky scent”, produced from musk glands at the base of their tail, and the smell is often mistaken for that of the skunk. While the Red Fox can be an aggressive predator and pose a threat to bird-stock and small pets, they also serve and important biological service in the control of rodents, and event non-native pest species. Some ecological groups look upon the similarity of the Red Fox and other, native fox species, and feel that the similarities and length of time the species has occupied native habitats and feel that they have become sufficiently endemic and are now part of the California landscape. 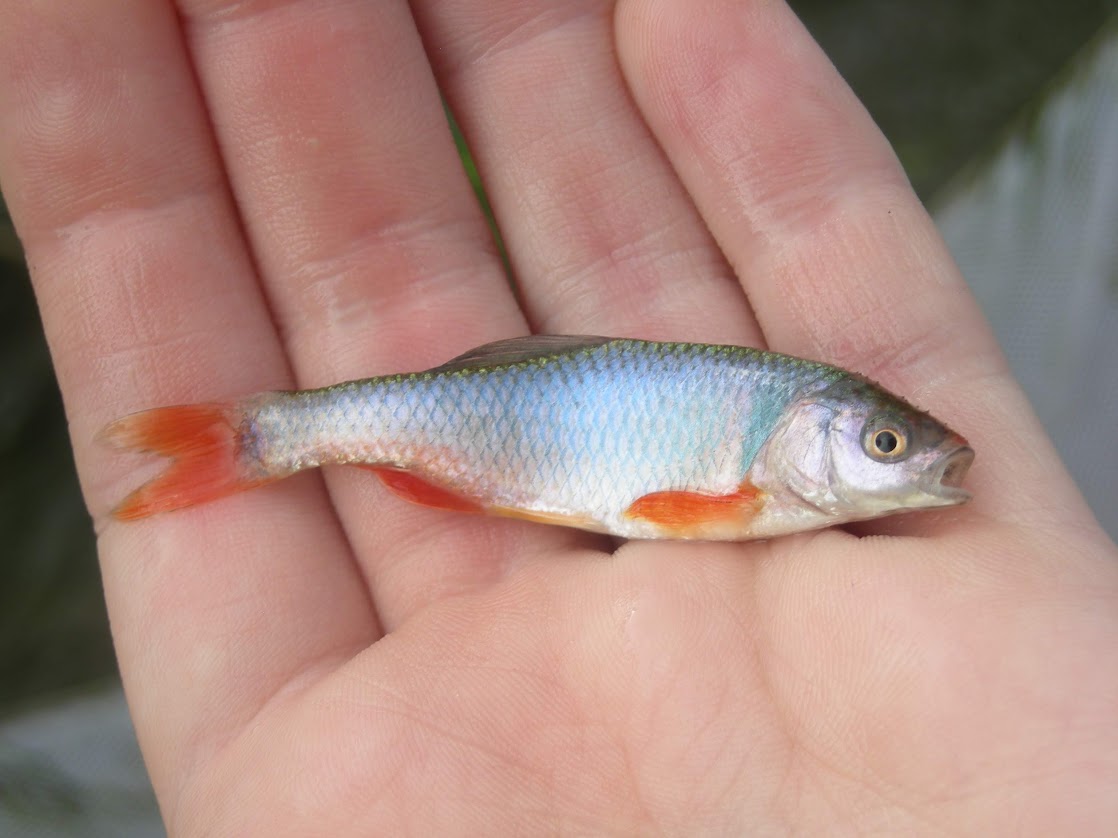 Red Shiner: The Red shiner (Cyprinella lutrensis), was originally found in river and stream systems from Mississippi west to Colorado and south to the Rio Grande river. As a popular bait fish it is now distributed nation-wide. This is the most invasive of a series of fishes that can be legally sold as bait around California. It became legal in the 1970s despite protests that it was known to have negative effects on native fishes elsewhere either through direct competition where it can quickly become established in huge numbers and/or is suspected of being able to interbreed with endemic species. In the mid-1990’s the red shiner invaded lower Cache Creek and now represents 90% of the fish in that system. It has been less successful in Putah Creek, but is becoming increasingly common. The initial introduction is often followed by the species' rapid multiplication, dispersal, and aggressive colonization. In some areas, dispersal of introduced populations has been aided by the presence of irrigation ditches and canals. When spawning, it is a very pretty little fish, with steely blue males tinged with bright red and is sold in the aquarium trade as the “rainbow dace”. 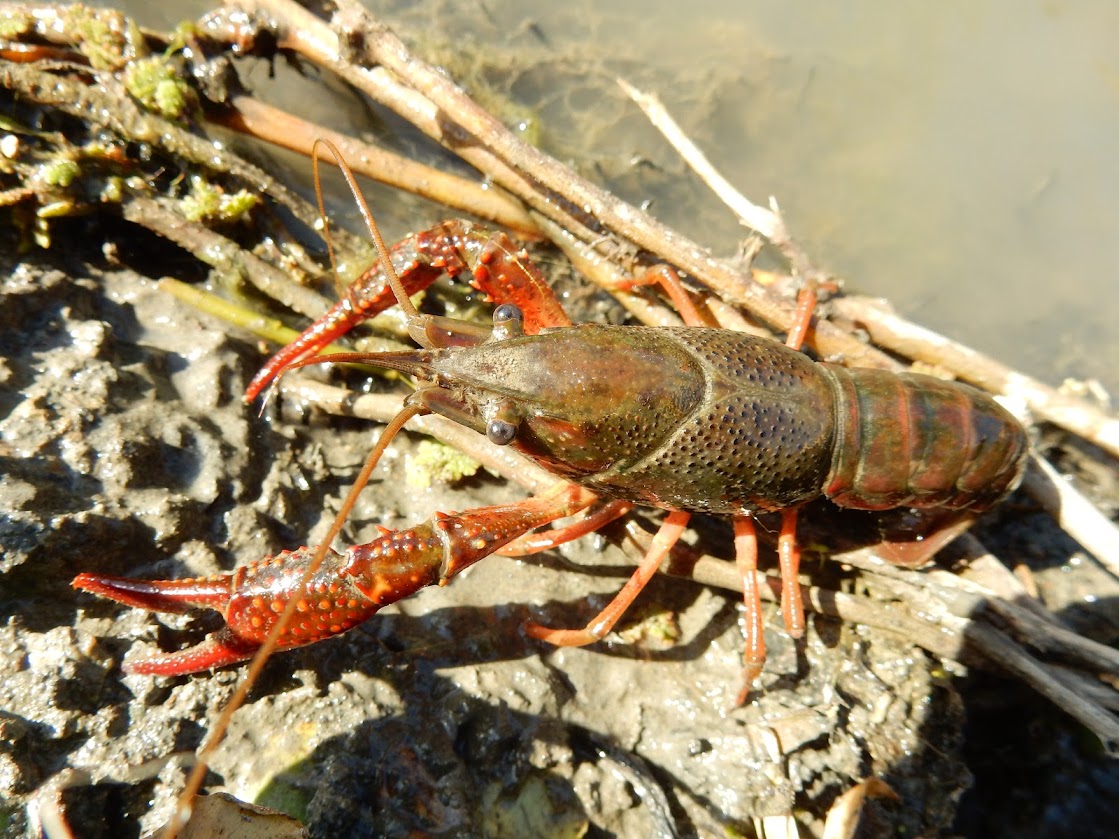 Red Swamp Crayfish: The Red Swamp Crayfish (Procombarus clarkia) is a native to northern Mexico and the southern and southeastern US. Once introduced into the Yolo County waterways it spread rapidly. Considered one of the most adaptable crayfish species, it is considered an invasive pest species that can colonize everything from creeks and rivers to reservoirs, marshes, irrigation systems and can survive for months in areas that are seasonally dry. Unlike its relatives that eat mostly plants, this species is omnivorous consuming everything from plants to fish eggs which can cause problems for ecosystems where it can threaten struggling populations of native plants and animals. Although this species accounts for a majority of the crayfish produced in the U.S. as food, you may want to be cautious about eating one from a questionable water source that may be contaminated by chemical or biological toxins. (Photo: Brian Keeley) 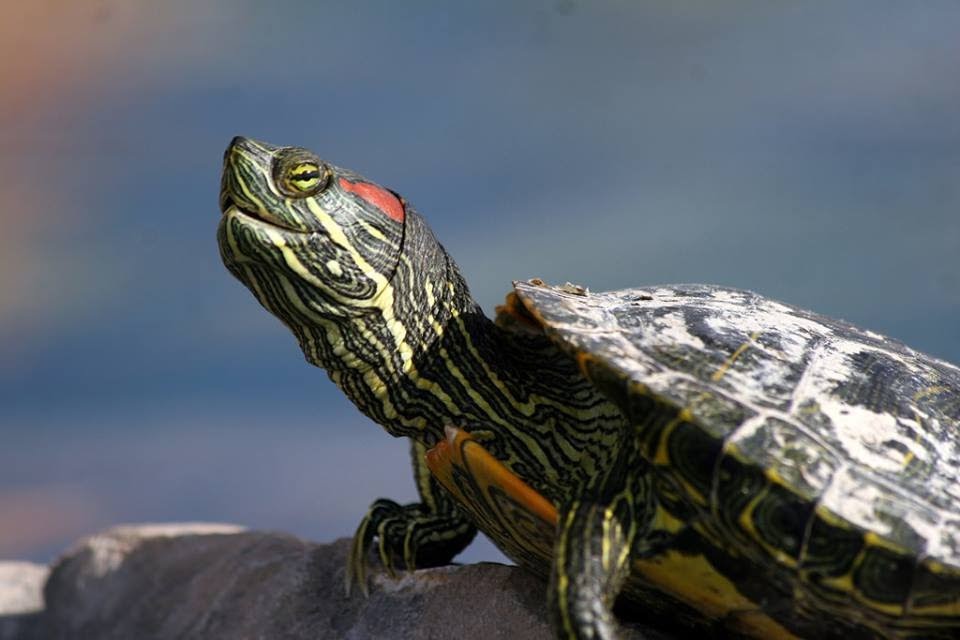 Red-eared slider: Did you have a red-eared slider as a pet when you were a kid? It is the most popular pet turtle in the United States, and is a popular pet world-wide. It gets its name from the small red stripe around its ears, and because it easily slides off logs into the water when startled. Red-eared sliders are native to the southern Great Lakes area, west to Indiana, and south into southern U.S. and northern Mexico. You may have seen them basking on logs or rocks along Putah Creek, as they are fairly common. Unfortunately they out-compete our native western pond turtles, which tend to be shy and reclusive, and reproduce much more slowly. Red-eared sliders make great pets, but please don't "liberate" your little visitor into our local streams or ponds. 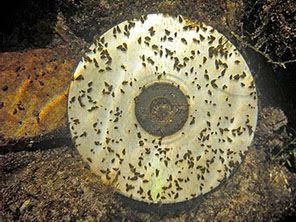 New Zealand Mudsnails (NZMS):These are one of our most formidable aquatic invasive species. NZMS were first observed in Putah Creek in the fall of 2003 at Fishing Access #3 below Monticello Dam. They spread somewhat slowly at first, but with this winter’s high flows, they may have spread widely. NZMS disrupt the food chain by competing for algae with native benthic (bottom-dwelling) macro-invertebrates like caddisflies and mayflies – excellent fish food and bird food. Help prevent the spread of NZMS in Putah Creek by ALWAYS cleaning and thoroughly drying your boots before entering other areas of the creek or other waterways. Photo courtesy of Ken Davis.

Back to Invasive Species Awareness page