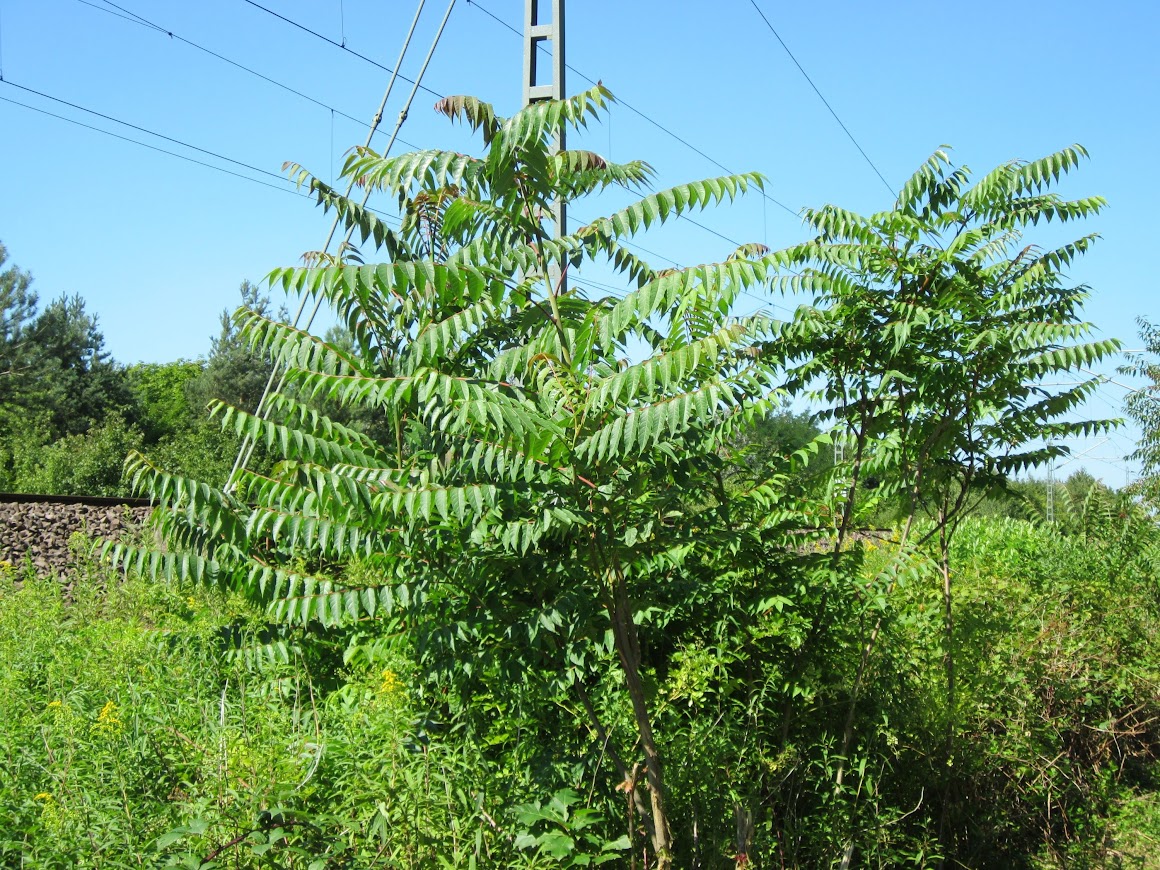 Tree-of-heaven (Ailanthus altissima): not so heavenly for Putah Creek. So named for its ability to rapidly grow towards the heavens, this native of Asia also produces copious seeds and vigorously sucker sprouts. In short, tree-of-heaven is a formidable competitor to native vegetation. It can resemble the native California black walnut - both have similar looking pinnately compound leaves - but the leaflets of tree-of-heaven have a small lobe at the base and are foul-smelling when crushed. 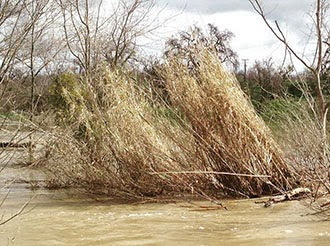 Giant reed (Arundo donax) is one of the most infamous streamside weeds. Imported from Asia and once planted as an ornamental (who doesn't love the look of bamboo?), it proved to be well-adapted to streams and flooding. Plant fragments washed downstream during a flood develop roots and quickly grow new plants, making it difficult and expensive to control. Fun Fact: Giant reed does not produce viable seed in North America and only spreads by sprouting from stem fragments and rhizomes (underground stems). 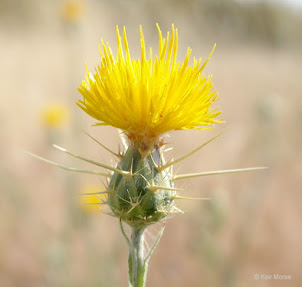 Yellow starthistle (Centaurea solstitialis): Why is yellow starthistle so successful at invading the landscape? For only 4.5" of plant, this yellow starthistle has nearly 29" of root! Yellow starthistle thrives in central California and is widely regarded as one of the worst weeds in our region. Not only does it spread rapidly, its water consumption can have significant drying effects on a landscape, it is unpalatable to grazing livestock that might control it, and it just plain hurts! Where to find it: everywhere( if you see a gray pallor over a hillside, that might be last year's dead stalks. Look close and you might find the ratty seedheads left over). Don't be part of the problem: check your boots, clothes, and gear after you've been in an area with lots of yellow starthistle. Make sure to remove any seeds so you don't spread this weed - and if you see some near you, pull them! 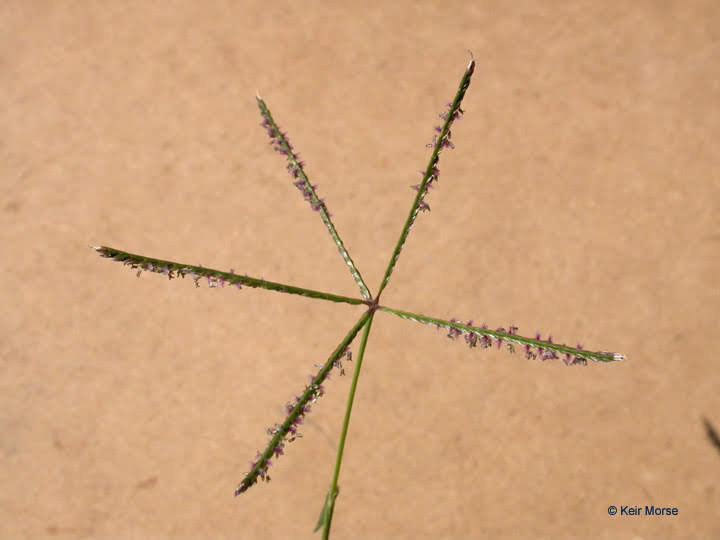 Bermudagrass (Cynodon dactylon): If you have ever been on a lawn, athletic field, or golf course in the warmer part of the United States, you might have been standing on Bermudagrass (Cynodon dactylon). A perennial grass that was introduced to the United States in the early 1800's for use as a turf grass and as forage for livestock, Bermudagrass is still one of the most popular grasses for lawns in warm climates. Its ability to spread aggressively via rhizomes (horizontal underground stems) and stolons (horizontal aboveground stems, also called runners) to form dense mats that are heat, salt, and drought tolerant - important for successful lawn grasses - has also helped establish its reputation as a hard to control invasive. It easily invades roadsides, gardens, farm fields, and other open spaces. In natural areas, Bermudagrass can be effective in soil stabilization and erosion control, but its mat-forming properties cause it to displace native grasses and other vegetation that provide critical habitat for native wildlife. Mowing or tilling to break it up only cause it to grow denser mats, and eradication requires either the nearly impossible task of completely removing of all plant pieces from the soil, or repeated treatment with herbicide. (Photo: Bermudagrass inflorescence, or flowering head. © Keir Morse) 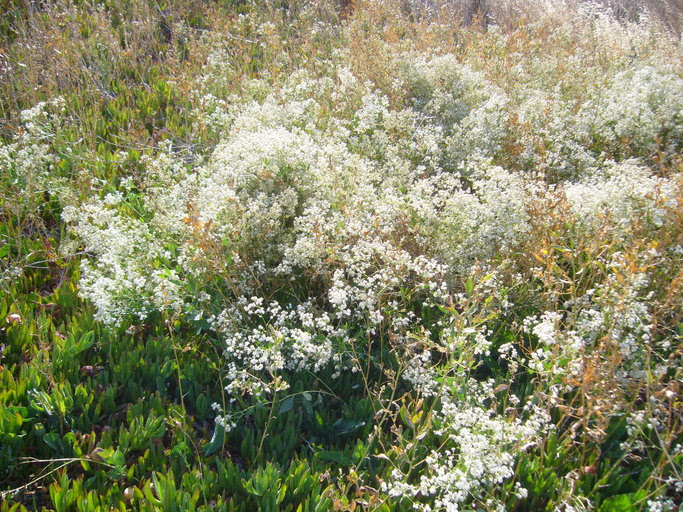 Perennial pepperweed (Lepidium latifolium): The Mustard Family, Brassicaceae, produces some of the most common weeds we see in the Putah Creek watershed. Its hard to miss the bright yellow fields of black mustard in the springtime, intermixed with the white or purple blossoms of wild radish. Perennial pepperweed is one of their more pernicious weed cousins in the Mustard Family. It is native to Eurasia, but now grows in many countries throughout the world, including much of the United States and in all but three counties in California. A noxious invader of wetland areas and waterways, perennial pepperweed produces three to eight foot gray-green stands topped with tiny white flowers. Its ability to spread by both seeds and root fragments allow it to form dense stands that exclude other plant species on which wildlife depend. Control of this weed is complicated by the fact that manual removal can increase the density of the stand owing to perennial pepperweed's ability to grow new plants from small root fragments left in the soil. This characteristic combined with its deep and prolific root system make it all but impossible to eradicate using this method. In short: don't pull this weed! The only viable method of controlling perennial pepperweed seems to be repeated treatment with herbicide.

Eurasian watermilfoil (Myriophyllum spicatum): This is one of the prettiest aquatic weeds in Putah Creek. This beautiful plant might look familiar, since it is often sold in pet shops and kept in aquaria - and that's how it has ended up introduced to waterways worldwide. Eurasian watermilfoil may be pretty, but it's also problematic. This weed can spread aggressively, altering the underwater habitats that native flora and fauna rely on. Manually removing it is tough - each fragment can grow into a new plant - and unless you can change the conditions that it enjoys (shallow, clear water with slower flows) it'll come right back. Where to find it: Lake Solano is an easy place to observe Eurasian watermilfoil, though it is present throughout Putah Creek. Don't be part of the problem: don't dump your aquarium into creeks, lakes, or rivers! If you need to rehome your fishy or frondy friends, contact a local pet rescue or pet supply store. 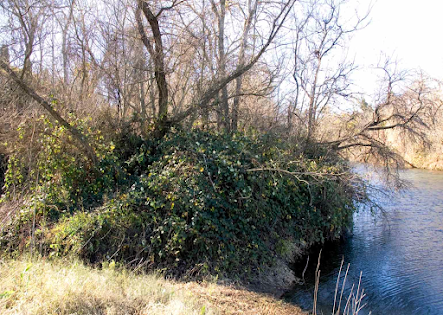 Himalayan blackberry (Rubus armeniacus): You may know them as the delicious, sweet berries that grow in large, mounding thickets along roadsides, disturbed areas, and especially along our local #PutahCreek. A native of western Europe, Himalayan blackberry got its start on the continent as a cultivated berry, which later escaped to the wild. Today it is widespread throughout California and listed as a “High” threat to California’s natural areas by UC Davis IPM. A single plant can create a thorny, evergreen thicket that reaches almost 10 feet high, with canes, or stems, that can extend over 20 feet in length, rooting and sending up new plants where it touches the ground. Birds and other wildlife eat the berries, dispersing the seeds of over long distances. This vigorous shrub is especially adept at displacing native vegetation with its dense canopy, shading out ground level plants, blocking access to water for wildlife and humans, and attracting rats which can prey upon native nesting birds. Read more about it at this link: https://wiki.bugwood.org/Rubus_armeniacus#General_Description

Back to Invasive Species Awareness page