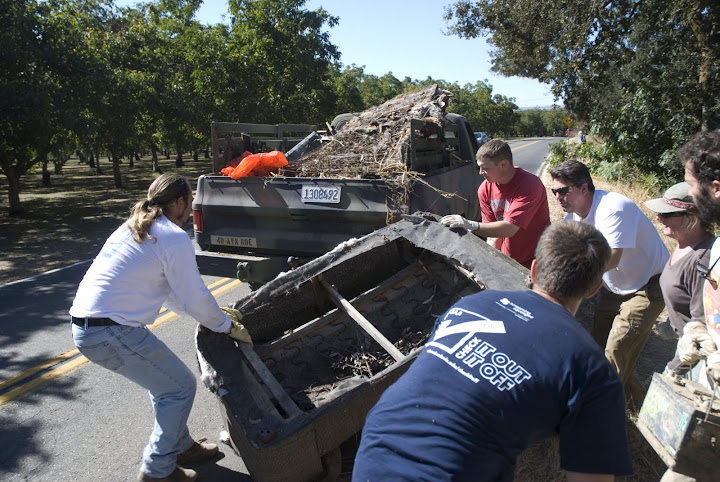 Young families, students, grandparents, local residents, foreign visitors and friends of the creek turned out to spend the morning scouring trails and collecting trash along the creek.

With 80,000 participants state wide, the Commission awardedits annual  “Most  Unusual Item Found” to the Winters volunteers for “dead cow in a bag” discovered by Winters High School volunteers Alex Balasek and Holly Bailey. This was a repeat award as Winters won the same acknowledgement last year for a grand piano hauled up from the creek.

Putah Creek Council charter member and cleanup volunteer Sally Moore says, “The amount of litter and trash along the creek has improved over the years.”Moore goes on to say litter has declined in recent years. She attributes the decline to school programs educating children about litter and public awareness, also due to publicity and education.

A number of volunteers sited the need to increase the creek’s ability to sustain habitat for wildlife, beneficial insects and natural vegetation areas as reasons for spending a warm, late summer morning working at a grimy, dust-choking, base chore. Among the six designated locations sited for cleanup, Boyce Lane appeared to have the most “large items.” It took eight volunteers pushing and pulling on tow ropes to pull a refrigerator, washer/dryer combination, various beds and box springs, and more up the steep slope of the creek.

Sacramento surgical veterinarian Celia Val Verde brought her visiting friend Jan White, also a veterinarian, from Washington. Val Verde canoes onPutah Creek and speaks of the “beautiful vegetation,” the swallows in the spring that nest under the bridges, the Western Pond Turtles, osprey, fishing eagle and the river otters that make the creek their home. She says other local rivers, Natomas or Consumnes, don’t have the wildlife Putah Creek supports and are often crowded with people.

Registration began at 9 am at Rotary Park with all volunteers signing in and offered free water bottles, coloring books, and more to remind everyone of the importance of maintaining a clean and healthy creek. Libby Earthman, Putah Creek Council Director, gave a brief welcome and followed up with general instructions regarding disposition of trash. Volunteers from Davis joined the crowd remarking what goes into the creek in Winters ends up in Davis. So they were eager to keep the debris from finding its way to their fair city.

The Balasek family, dad Kurt, daughters Alex and Rebecca, are repeat volunteers and enlisted friends from Winters High School. Students Denise Fernandez, Andrea Fernandez, Danllely Leon and Jose Valdez came for the additional service hours to be used for High School classes and to add volunteer experience to their resumes. Nine year old Sienna Mazza says this is her second year and she “believes the earth should be cleaner.”

Paul Marcotte, attached to the UC Davis chancellor’s office, brought 13 volunteers from the Humphery Fellows Program. Marcotte says this is a unique program established by the US Department of State to bring high ranking environmental employees from around the world to Davis to study environmental issues, return to their homeland and implement new programs. Participants came from Ethiopia, Uganda, Botswana, Vietnam, Mexico, Argentina, Zambia, and China.

Participants returned to Rotary Park for lunch and a fun filled time of raffle prizes for some unique and unusual finds along the creek. Luz Taposok from the Philippines received her choice from the prize table for “Traveling the Farthest.” GI Joe with no clothes, clothes were later found farther down the creek, won Elizabeth Williams the prize for “Most Unexpected” find. The “Largest Number of Items” prize went to Sally Moore for the 370 spray paint cans collected at Stevenson Bridge (aka Graffiti Bridge).The category “Would have worked but…” went to Logan Fox for a fire extinguisher. And the award-winning “Dead Cow in a Bag” won for “Most Disgusting Find” with Alex Balasek and Holly Bailey garnering prizes from the table.