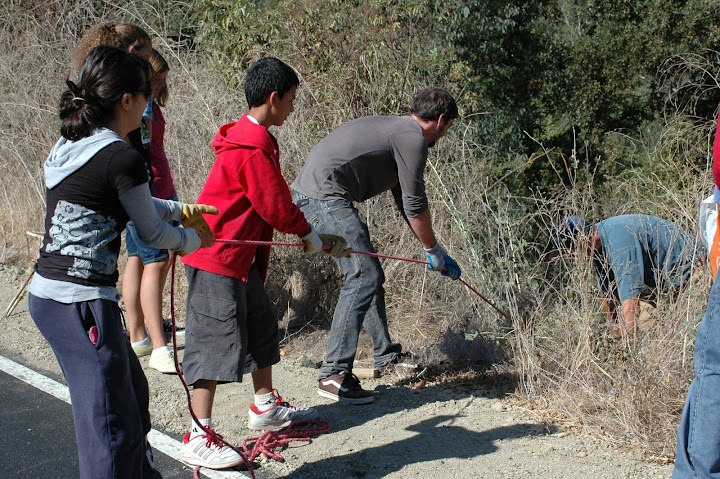 In conjunction with the California Coastal Commissions’ 27th annual Coastal Cleanup, Putah Creek  Council sponsored the annual Putah Creek Cleanup on Saturday, September 17th.  Check in began at 9 am with a short introduction by Libby Earthman, executive director of the Council, and hard-working volunteers chose their desired sites heading out to collect trash in buckets and bags.

Earthman began by explaining why Sacramento Valley waterways, including the creeks and streams surrounding Winters and Davis, need to be cleaned, “All litter and debris eventually flow to the Delta then on to San Francisco Bay before it makes its way to the ocean.”

Volunteers labored along the north and south sides of Putah Creek from the car bridge to I-505 and on past I-505 on the south side of Putah Creek, including over 20 people working at Stevenson Bridge. In addition, a new location was cleaned this year in the Dry Creek area off The Horseshoe in Winters.

Making every effort to create less waste, the Council suggested volunteers bring their own buckets, gloves and reusable water bottles.  In all, over 100 volunteers collected over 4,560 pounds of litter and dumped items.

First year participants included locals Heather Pilmanis and son Caleb, 3. Having grown up in the area, Heather Pilmanis said, “It’s great to see how much it has improved. We hope to make the Cleanup an annual experience.”

Once again, Humphrey Fellows from UC Davis, sponsored by the U.S. State Department, participated. Coming from approximately a dozen different countries, the fellows are mid-career professionals specializing in climate change, natural resources, and agriculture. When asked why the group volunteers, Gwen Benner, assistant director of the program said, “the participants of the program want to give back to the taxpayers” who provide this learning opportunity.

Volunteers returned to Rotary Park at noon for a burritos lunch from Winters’ own El Pueblo Taqueria . Contests and raffle prizes were awarded as the Cleanup finished up. Prizes were awarded to the longest returning volunteer, Mick Klasson, 8 years; youngest volunteer, Caleb Pilmanis, age 3; and most seasoned volunteer, Pierre Neu.

Honorable mention goes to ten-year old Walker Holmes of Winters. Holmes has been coming to the Putah Creek Cleanup with his mother, Jean Whitsman, since he was 3.

Participants commented on the unique and unusual items pulled from the creek this year: a complete bedroom suite with a lovely mirror which was intact­­, voted most reusable item found; an interesting piece of art: a twisted, metal wire bonsai tree on a marble base; and of course the most disgusting item.

A local Winters family offered a $500 matching gift if the Council could raise $1,000 from the community by September 30, 2001. Earthman gratefully reported $3,300 had been raised and was extremely thankful to the generosity of the community.

All volunteers are to be commended for a “dirty job” well done.