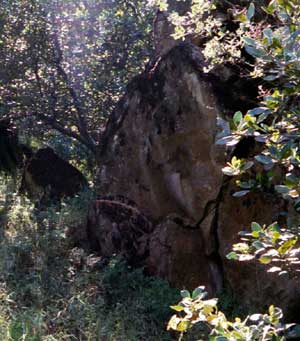 If Putah Creek is the unexplored back yard, then the geology of the Central Valley is a mystery novel left unread by all but a few.What's underneath our feet -- and why's it's so flat -- is actually just as interesting (as the mountains)," Eldridge Moores, UC Davis professor emeritus of geology, said recently.


Moores -- recognized nationally both as a booster of geography education and as Pulitzer Prize-winner John McPhee's guide for the book "Assembling California" -- likes to call geology not a mystery novel, but a "historical archive you can read if you learn the language." 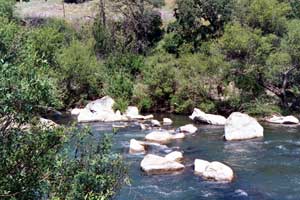 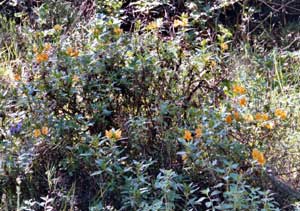 That language is geology.

And on a recent, warmer-than-average Saturday in April, he and Robert Matthews, also a UCD professor emeritus of geology, joined about 45 people for a 3-mile hike along the south side of Putah Creek, between Winters and Lake Berryessa in Solano County.

The Putah Creek Council sponsored the daylong event, which covered a range of subjects, from everyday uses of the creek to ongoing restoration to a long-view of the area in creeping geologic time that can be hard to fathom.

Dressed in khaki and using grass as a pointer, the bearded Moores explained that the landscape before them was there for a reason -- geology and geologic activity, that it had formed over millions of years and that, right there in the sunlight, they were watching it form and change at the rate it always had.

Putah Creek, he told the hikers, predated the uplift of the Coastal Range, which began 3 million years ago; the uplift continues today at a rate of one or two millimeters per year, as the Pacific and North American plates rub as they slide past one another. The Coastal Range is also moving slowly east.

Putah Creek has been able to continue cutting through the rock fast enough to keep flowing.

Geologists believe the reason the valley is so flat is because it's a big slab of oceanic crust and dense mantle sitting on the edge of the continental plate, Moores explained. The valley rests on a microplate, one that's "stuck" -- or relatively stuck: moving northwestward with the Pacific plate, but even more slowly.

Moores surveyed the green landscape behind him, seemingly soft, rolling hills that in truth cover rock by a foot or two:

"If we look off to the slopes off to the north of us, what we see here is Great Valley sediments and these are steeply tilted. They're tilted at about 80 degrees or so ... These rocks in here are about 80-90 million years old," he said. "As you get into the valley, there are some rocks in there that are about 50 million years old, so it's younger. And then up on top (of the ridge) there's a black blob, that's actually an outcrop or close to an outcrop, of some basalt, it's a volcanic rock that's about 15 million years old.

"Above that you can see some lines up on the hillside that are resistant layers which are tuffs, these are volcanic deposits you can see on the road cuts down over and here and up Pleasants Valley Road ... those are about 1.8 million years old. That's the Putah Tuff, an air-fall deposit that was formed probably by some eruption near the north end of Napa Valley, although the eruptive center has never been found."

Moores told the group it was important to try to understand the time such movement takes. He suggested the hikers think of one year as one millimeter.

"All of recorded human history is within the last 10,000 years. Ten thousand years is 10,000 millimeters, that's 10 meters, that's from here down to those logs...," he said. "If you continue on eastward counting off your millimeters, get on Interstate 80, the dinosaurs wipe out at about Sacramento.

"In order to get all the way to the origin of the earth..., from here you've got to go to Boston."

The surface of the landscape, Matthews noted, can change all too quickly.

He talked to the hikers about slides at the site of one of several major ones in the area in January 1998, when Highway 128 was closed in several places.

The coastal range, Matthew said, is home to in all shapes, sizes and speeds of slides, from slow mud flows to boulders bearing down the like Greyhound buses with the breaks out.

He talked about how cattle grazing can exacerbate the problem, and how little expensive engineering can do to stop slides.

In 1906, Matthew said, Cache Creek was dammed by a mudslide before breaking through. To date, about 100 slides have been mapped along that waterway, along with two active fault lines.

Said Moores, "The moral of the story is, don't put a dam there."

The land where the geology hike took place is part of three parcels totaling 526 acres along Highway 128. It has been partially owned since 1989 by Tom Cahill, a UCD professor emeritus of physics and atmospheric science and research professor in engineering, and his wife, Ginny, a deputy attorney general who also teaches environmental and water law at UCD.

The hike began just off the Cahill property at Four Winds Nursery, where John and Mary Helen Seeger grow 50 varieties of dwarf citrus trees and ship them off to grow on patios across the country.

John Seeger walked the hikers through the process, detailing how weed seeds are filtered out from creek water and the water treated with ozone to effectively sterilize it, eliminating the need to use fungicides, and how a vintage drip system helps the growers minimize the amount of water they use.

An enthusiastic host, Cahill told the story of how thanks to taking out another mortgage on their Davis home and the bumbling of a marijuana farmer who lit a blaze that ended up damaging part of the land, reducing the asking price, Cahill, his wife and a friend could afford the land.

"It looked terrible," he said.

Cahill stood on a grassy spot, dotted by lacy blue larkspur and dozens of varieties of other, smaller flowers, and talked about the "surprising and delightful" return of purple needle grass and other native species to a spot burned in a fire last year.

He pointed to an area where two weeks earlier he founded matted grass and blood; there, he felt certain, a mountain lion had leapt down upon its dinner.

The land, which climbs steeply about 1,000 feet in places, is also home to more than 35 species each of birds and butterfly, from hawks to western bluebirds to turkeys, fox and some healthy-looking coyotes, he said. Blue oak trees and manzanita give way to gray pine, valley oaks, black walnuts. Red buds have come back, reaching up through poison oak.

"The creek constantly reworks itself like that," he said.

The Cahills have opened the land up to researchers from UCD, ranging from botanists to biologists, and small groups of campers and hikers.

On the day of the Putah Creek Council's hike, he relaxed with his visitors as they chewed their lunches at creekside.

"That's what it makes it so fun for us," Tom Cahill said. "I just love sharing (the land). I'm sorry it was under-appreciated before, but I like taking people to the land that appreciate it now."

Cahill said he planned to see to it the land is never developed and will always remain open to the public in some way. He imagines property owners someday stitching together hiking trails stretching east all the way to the Vic Fazio Yolo Wildlife Area.

"It's an amazing treasure we have here -- and it's just sort of a hidden one," he said.

In fact, they were salt springs, vaguely smelly spots of brackish water that can be found up and down the coastal ranges. The puddles are often an indicator of fault lines, though Moores said no thorough geologic examination of that reach of Putah Creek has been done.

"They're actually remnant marine waters that were incorporated in the sediment at the time of the formation..," Moores said. "This water stayed in the sediments and it's being squeezed out right now, in part because of the tectonic activity taking place."

Salt water, oozing to the surface -- a sign of the intense pressure below our feet, another sign that the plates of the earth are still moving on, as slowly as fingernails grow.

"You don't not want to step in this mud," Cahill warned the hikers, "your shoes will never be the same."