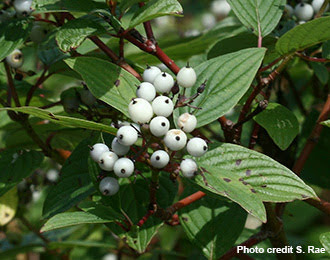 American Dogwood (Cornus sericea) is fairly common along streams in this area and can be found growing along Putah Creek in both the upper and lower watershed. It has a wide distribution from California, north to Alaska, throughout the country to the eastern United States, and south to Mexico, where it generally grows at elevations below 9,000 feet in soils that are saturated during some portion of the year .

As a deciduous shrub the  American Dogwood grows 5’ to 13’ tall with dark green leaves paired opposite each other along its branches. During flowering,  June – August, many tiny, cream colored flowers form dome-shaped inflorescences (flower heads), which then go on to produce clusters of white berries.

Historically, this plant was used extensively by many indigenous tribes to meet a diversity of needs for medicinal uses for treating skin ailments, stomach disorders, and even assisting childbirth. The berries were eaten, the inner bark and stems were used for basketry, making dyes or mixed in as a flavoring for smoking tobaccos.

The American Dogwood can be an attractive landscape shrub where it is often planted as an ornamental, as a windbreak, and to attract wildlife. It provides a source of pollen and nectar to native bees and the leaves serve as a host plant for other insects. A wide variety of birds eat the berries, and small to large mammals browse the twigs, foliage, and fruit. Its thick shrubby form provides cover for wildlife and nesting habitat for songbirds. The fruit ripens in late summer, and besides being available through the fall, some of the berries may persist on the plants well into the winter months. In the autumn, its leaves put on a fall color display just before revealing its decorative reddish branches for the winter. It can be propagated from seeds, root divisions, layering, and cuttings. It is a “thirsty” plant so it does require regular watering.