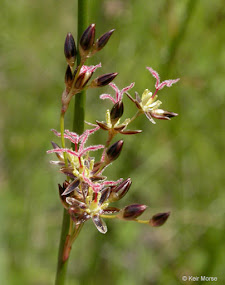 Baltic rush (Juncus balticus), also known as wire rush, is noticeable for its conspicuously straight and vertical, dark green stems arising from the ground. Flowers, appearing to burst out of the sides of the stems, are notable for their often pink stigmas (the part of the female flower where pollen lands and germinates), visible during bloom time. Baltic rush is a perennial herb that grows to over three feet tall and spreads with long, scaly, underground stems (rhizomes) to create stands near to the water.

Rushes provide food and habitat for a variety of birds and mammals. Songbirds and waterfowl eat the tiny seeds and muskrats feed on the roots and rhizomes. Rushes also provide cover for wading birds in wetlands, and spawning areas for fish.

A valuable weaving material for baskets and mats, Baltic rush is of historical importance to a number of native California tribes. Its seeds and young shoots can be eaten raw or roasted, and the sugar that forms along the top of the plant can be collected and eaten as a sweet.

Baltic rush fixes nitrogen, meaning it draws nitrogen from the air and uses it to grow, and upon decomposing, adds the nitrogen to the soil in a form usable by other plants. Its rhizomes and dense root system spread out to capture and stabilize soil, providing important erosion control services when used in habitat restoration.

Baltic rush is widespread throughout the world, and grows at elevations from sea level to 7,200 feet in California. Look for it growing along the edges of Putah Creek!