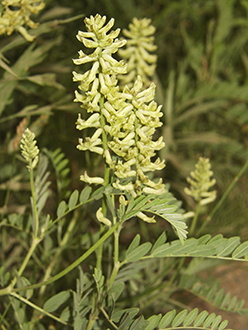 Many of us have memories or still enjoy eating licorice, but may not know it comes from a plant or the history behind it. Our native licorice (Glycyrrhiza lepidota) can be found throughout most of temperate North America (except the southeast) from Canada down into Mexico. The American “Wild licorice” species has properties similar to its relatives who are found worldwide where it has been used as flavorings and sweeteners in candy, foods, and medicinally in most cultures where its uses are described in some of the world’s ancient texts.

All parts of our Wild licorice were used medicinally for a diversity of ailments by many native North American tribes, including coughs, fever and chewed for toothaches or by infants during teething. The plant contains a substance called Glycyrrhizin (named for the genus) that is 50 times sweeter than sugar where the highest concentration is found in the root. When slow roasted the long, sweet, fleshy roots are said to taste like sweet potatoes.

Wild licorice is a perennial growing up to 3 ft that produces conspicuous clusters of attractive bright yellowish to white flower clusters that are pollinated by insects during the late summer. As with most plants in the Pea family, Wild licorice forms a seed pod. The small pods of this species are covered with many stout, hooked, brown spines which cling to animal fur and help move the seeds to new sites (called Epichory). The roots have nitrogen fixing nodules which help to enrich the soil.

The “Wild licorice” (Glycyrrhiza lepidota), is found across much of North America in sandy loam soils. Found mostly in temperate climates worldwide, our native licorice has the same properties which gave rise to the popular candy licorice and it has been used by most cultures including North American tribes as a food flavoring and medicinally for many ailments. As a member of the Pea family, its attractive bright yellowish-white flower clusters attract pollinators, makes a “pea” pod, and its roots improve the soil by fixing atmospheric nitrogen.