NOTE: This is the first in a three-part series of articles by Putah Creek Council to educate residents about a creek restoration project to improve water supply reliability in Solano County.

During the 1950s old car bodies 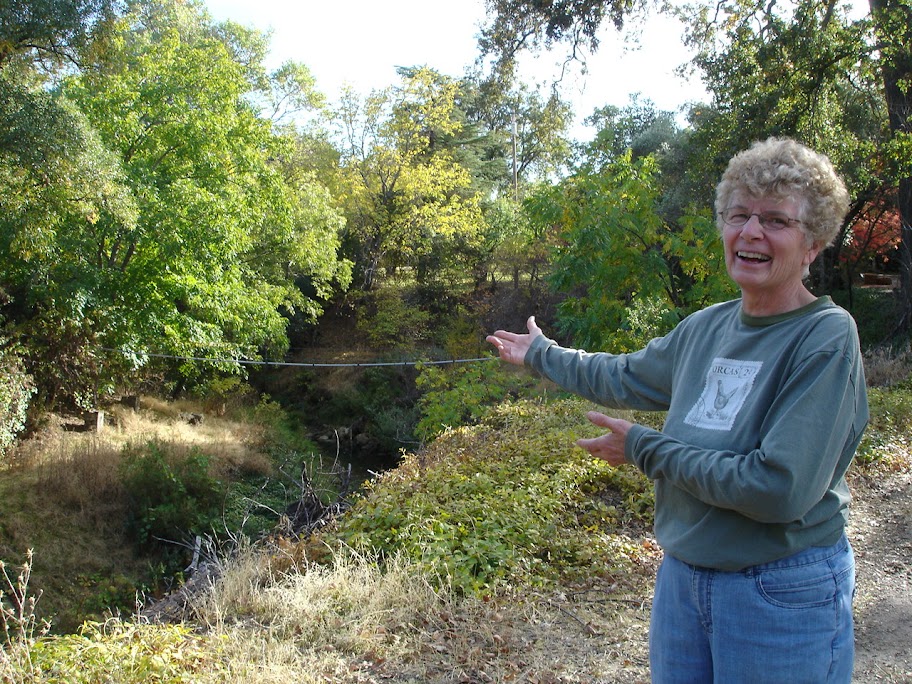 whose engines had been removed were commonly embedded along river banks by self-reliant farmers who needed to control severe erosion, a method called ‘Detroit riprap.’ This method was employed by some along Putah Creek, including Ethel Hoskins’ family who owned much of Pleasants Creek. The use of Detriot riprap was sufficiently widespread that in the late 1990s when one of Ethel’s friends visited he looked at the banks of Pleasants Creek and joked about all the car bodies, “Wow, Ethel. That must have been quite a car wreck.”

Erosion is a natural process which moves soil and rock downhill and downstream, and an important force in shaping rivers. It is possible to have too much of a good thing: human activities occasionally speed up this process enough that erosion can threaten property and imperil drinking water supply.

Hoskins set out to find a permanent solution to the erosion problem in 2002.  With funding from a variety of local, state, and federal agencies, her ranch became a demonstration site for working with natural materials including rocks and native vegetation to help undo prior damage and prevent further degradation.

Hoskins has an easy laugh, sunny disposition, and wry sense of humor. As a life-long resident of Pleasants Creek, tributary to Putah Creek, Hoskins likes to laugh about the fact that she is the granddaughter of the original 1850 homesteader on the creek: William James Pleasant. Hoskins is quick to point out that after 150 years, she remains on the original homestead with only three generations separating herself from the man who homesteaded much of 4,000 acres of Pleasants Valley.

William James Pleasants came to Pleasants Valley in 1850 after leaving Bidwell’s Bar gold mining operation just months before the gold miners struck gold near Chico. He never looked back, “This was a better strike than any gold I could imagine,” Ethel remembers her grandfather quipping about the ranch.

Even today, a visit to the homestead feels like a step back in time. Men with thick hands buzz about the property, eager to volunteer to keep the place in working order to preserve a glimpse back to days gone by. John Knowles, ranch manager, was eager to join in the conversation about the 2002 creek project that stabilized the creek and brought back much of the wildlife that enriches the area. “It’s a different creek today than it was before the project. When you go down there today, it’s peaceful. It’s beautiful. For a while, you are someplace else.”

Hoskins has her grandfather’s daily journals, dating back to the mid-1800s. Wildlife in the Putah Creek tributary was abundant. He wrote of hunting bear, elk, and antelope on the property, and catching steelhead upstream of the homestead on a tiny tributary to Pleasants Creek.

“How many elk, bear, antelope roamed this area? We will never know. We do have one heck of a creek now, even if it’s not entirely what it once was. We have mink, otters, beaver, bluebirds. We have documented 119 species of birds on the property,” Knowles gladly reported.

The changes present at the ranch today are a result of concerted effort to reduce erosion using native plants and natural materials, control invasive weeds, and welcome wildlife back to a portion of its former range.

In moderation, erosion is not a problem, it is even beneficial. Erosion is a natural process that brings new gravel, cobble, and soil into a creek, replenishing what washed downstream in earlier storms.

The troublesome erosion in Pleasants Creek began in the 1950s, soon after the completion of Monticello Dam and Lake Berryessa. During the dam-building push after World War II, few understood the unintended consequences of damming a river. While some worried about the impact it would have on salmon and other wildlife, few if any understood the impact it would have on tributary creeks downstream of dams.

Decades of experience and dozens of dammed rivers later we have a better understanding of the complex relationship between dams and erosion. Few anticipated one of the largest unintended consequences of dams: they often cause massive erosion in downstream tributaries. For more information on the mechanics of this process, visit www.putahcreekcouncil.org/news

Hoskins remembers Pleasants Creek as a moderate dip in the landscape, perhaps fifteen feet deep and thirty feet wide. The accelerated erosion since the completion of Monticello Dam dug the channel up to forty feet deep and 100 feet wide, with sheer cliff walls void of any vegetation. As acres of land washed away during storms, heritage oaks were lost to the creek.

Native plants, plants which evolved in the region and provide erosion control and wildlife habitat, could not survive on the resulting sheer walls of Pleasants Creek.

The residents along Pleasants Creek, shocked at the sudden change, began arming banks with Detroit riprap and the California Conservation Corps came in to plant a “miracle” plant: arundo. Arundo is a false bamboo that was then-believed to be a silver bullet for halting erosion—it grew quickly, spread rapidly, and needed no additional water or maintenance.

Many of the very characteristics that made it a go-to in the 1950s are what make arundo so problematic to eradicate now that we understand the problems it causes.

Like many invasive weeds, arundo displaces native plants that provide wildlife habitat. And while arundo grows quickly, it does not prevent erosion—it accelerates it. The tough, upright stalks impede flow, slow water velocity, and cause fine sediment to accumulate among the plants. The stalks essentially bury themselves in sediment and act like rebar in concrete forming hardened pillars during storm flows, deflecting water away from the plant and toward the banks. In areas where arundo is thick it is common for the water to carve a new channel around the arundo rather than pass through it, making the erosion problem even worse.

Another life-long resident of Pleasants Creek, Coy Nichols, has witnessed erosion eating away at his land. He believes the creek has deepened thirty feet along his property since the 1950s. One stormy night the creek cut back his bank sixty feet into his orchard for 280 linear feet. “When the bottom gets washed out, the top comes crumbling down,” said Nichols, describing the process of the creek undercutting the banks and causing them to collapse due to gravity.

Putah Creek is dammed twice before it reaches Winters: once at Monticello Dam to create Lake Berryessa, and again less than ten miles downstream at the Putah Diversion Dam to create Lake Solano. Pleasants Creek joins Putah Creek just upstream of the Putah Diversion Dam, so the massive sediment it carries downstream during storms is delivered to Lake Solano—the diversion point for water heading south to Solano County for drinking water and agriculture.

Such massive amounts of sediment being dumped into the diversion point for a significant portion of the drinking water for Solano County makes treating the water to drinking water standards very complicated. This problem can be very expensive to address.

See next week’s article, “Study Identifies Erosion as Threat to Local Water Supply” to learn about how erosion and sediment impact an important drinking water source for Solano County.

For more information about this project, please click here.