Note: This is the third in a three-part series of articles by Putah Creek Council to educate residents about a creek restoration project to improve water supply reliability in Solano County. 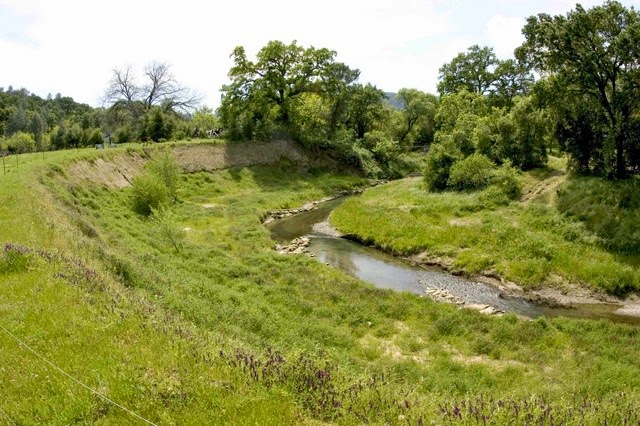 Rich Marovich, applied for and was awarded the “Pleasants Creek Sediment Reduction Project” from Proposition 50 water bonds through the State Water Resources Control Board to address erosion coming from Pleasants Creek, a tributary to Putah Creek. The work intends to stabilize eroding stream banks which deliver so much sediment downstream during rain storms that it threatens the reliability of one of Solano County’s drinking water sources: Putah Creek.

Unprecedented erosion along Pleasants Creek began shortly after the completion of Monticello Dam on Putah Creek. The dam creates Lake Berryessa, a major source of drinking and irrigation water for Solano County during the summer.

During rain storms, Pleasants Creek swells in size, sending thousands of gallons per second into Putah Creek. However, Monticello Dam retains the water which would have naturally flowed down Putah Creek, keeping Putah Creek fairly small even during storms. Because the magnitude of storm flows on Putah and its tributary Pleasants Creek are now unequal, Pleasants Creek enters Putah Creek at a steeper slope, essentially a mini-waterfall. Pleasants Creek began to down-cut and widen to disperse its energy, causing massive erosion. Pleasants Creek and other tributaries downstream of Monticello Dam are now roughly three times deep and wider than before the dam was constructed. More detail on this process is available at www.putahcreekcouncil.org/news

Ranchers living along Pleasants Creek began to lose land to erosion at an alarming rate after the completion of Monticello Dam. They armed creek banks with an invasive plant, arundo (a false bamboo), in the hopes that it would curb the erosion and prevent their land from being washed away.

Within a decade, the opposite happened: arundo had spread so aggressively that it sped up erosion. “At the time, the federal government was promoting arundo as a cure-all for erosion,” said Marovich. “What they didn’t realize is that because arundo is not native to this area it does not behave favorably during storm flows. Our native streamside plants like willow lay flat during storm flows, allowing water to pass with little obstruction while their roots hold streambanks in place. Arundo does the opposite—it’s like having millions of cement pillars in a creek, each of which stands rigid during storms, sending raging water into unprotected banks and promoting streambank failure,” said Marovich.

Marovich is now at the helm of a three-year project to begin addressing the massive erosion in Pleasants Creek, the first step of which is to control arundo.

“We need to control the weeds before we can address the erosion. As was demonstrated at Ethel Hoskins’ ranch in 2002, once we get the arundo under control we can bring in heavy equipment to re-shape the banks from sheer cliffs of soil into a sloped hillside which will support native vegetation, said Marovich. “Native plants are the binding ingredient to making all of this work,” he added.

Marovich’s team will work with willing landowners to survey high priority sites, treat arundo, and install native plants at places where arundo was removed. The re-shaped banks will be armored by native plants, and the stream flow will be directed away from vulnerable banks using lines of boulders in the channel. The lines of boulders will be placed by trained stream engineers into structures which re-direct the water’s energy away from eroding banks using a method called bio-engineering.

A pilot project at Hoskins’ ranch in 2002 stabilized an eroding bank with boulders and vegetation that withstood high flows in 2006 and 2008 without damage.  The project created gently sloped floodplains along the flow channel where native vegetation now flourishes. The boulders have disappeared under thickets of willow, rushes, cattails and other native vegetation in what was previously a barren and vertical streambank. The vegetated floodplains slow flood flows and protect the banks from being undermined. The native vegetation also provides habitat for watchable wildlife.

“The construction of two big box stores in Fairfield generated a tremendous amount of boulders that we will use in this and other projects. The companies needed a place to take the waste rock, and were even able to truck it to us. Such collaborations have stretched our budget, and will allow us to serve more landowners,” said Marovich.

Marovich went on to clarify that, “None of the methods can be used in isolation. No quantity of boulders could stabilize the streambed unless we first control the arundo, slope back the banks in high-priority areas, and then use the boulders to direct the stream flow away from vulnerable banks. Moreover, the long-term success of this project hinges on establishing native plants in disturbed areas. Native plants’ roots will form a web of deep-reaching roots which will provide the strongest erosion protection possible,” said Marovich.

Native plants not only provide superior erosion control, they also provide habitat for wildlife. “Our partnership has been monitoring wildlife at restoration sites along Putah Creek for about fifteen years. Once native vegetation is restored to the landscape, native wildlife follows. We’re often amazed at how quickly birds move back into a restored area that was once dominated by impenetrable thickets of weeds,” said Marovich.

Hoskins agreed. “I have my grandfather’s journals dating back to the mid-1800s, and he documented everything from farm yields to weather to wildlife. We’re never going to see what he witnessed, but as I’ve watched wildlife return to my land over the past decade it’s been very gratifying to see that doing right by my land has brought back some of the richness my grandfather enjoyed.”

The project will continue through December 2014.

Hoskins hopes many landowners will choose to participate. “What is the benefit to keeping it how it is?” she asked. One of the project partners on Ethel’s 2002 project likened the project to giving the creek back its peace. “I really like that,” said Ethel. “It does feel more peaceful down there now.”

While no one anticipates rolling back the hands of time, project success will increase the reliability of water supplies downstream, reduce invasive weeds delivered to downstream locations, and increase wildlife habitat. Given the success of the similar pilot project at Ethel Hoskins’ ranch in 2002, the project team anticipates similar results for more Pleasants Creek landowners in the coming years, and helping Pleasants Creek—and landowners, wildlife, and downstream water users—find more peace.

If you are interested in learning more about this project, please visit the Pleasant Creek Project page. When the rains return this fall, Putah Creek Council will organize groups of volunteers to help replant restored areas with native plants. If you’d like to hear about tree planting opportunities, sign up for Putah Creek Council’s e-newsletter on the home page at www.putahcreekcouncil.org

Readers of this paper are invited to take a quiz about what they learned from this article. A winner will be randomly drawn from all entries, regardless of how many answers are correct, in October. The winner will get $100 cash. Deadlines and the quiz are available here.